Fly Over The South Of The Island

In this paragliding guide, you will find everything you need to know.

Some people are still wondering what is paragliding. That is the reason why Overfly Tenerife has created this paragliding guide in order to solve all your doubts. Moreover, there are people who want to learn to paraglide but they feel like they don’t know how safe is paragliding or they simply don’t know where to get paragliding equipment or where they should take the perfect paragliding lessons.

In this paragliding guide, you will find everything you need to know to enjoy the best paragliding experience in the world here in Tenerife.  We will talk about paragliding in Tenerife and its prices, we will explain  what is tandem paragliding and how is a paragliding take-off. We will also help you to overcome your fears if you are one of those who are wondering if paragliding is scary — calm down, because the answer is definitely no!

Paragliding is a sport which continuous development has resulted in both performance and safety improvements. As you probably already know, in this sport you will fly using a paraglider. Paragliders are light in weight and they are foot launched. 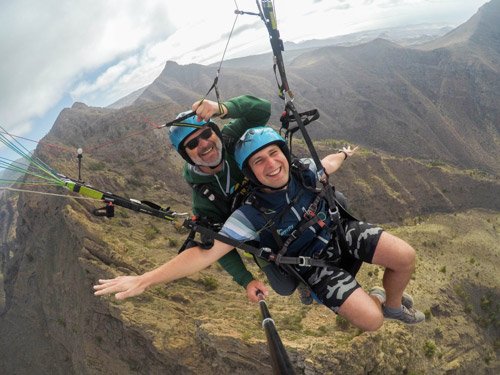 Are you looking for adventure? What about practicing paragliding in the South of Tenerife? Don’t hesitate! In our paragliding guide you will find the best tips to practice this sport. Read carefully and follow these tips!

In our paragliding guide you will find all the information that you need to practice paragliding in Costa Adeje, in the South of Tenerife. Pay attention to every detail and just enjoy the flight with us! 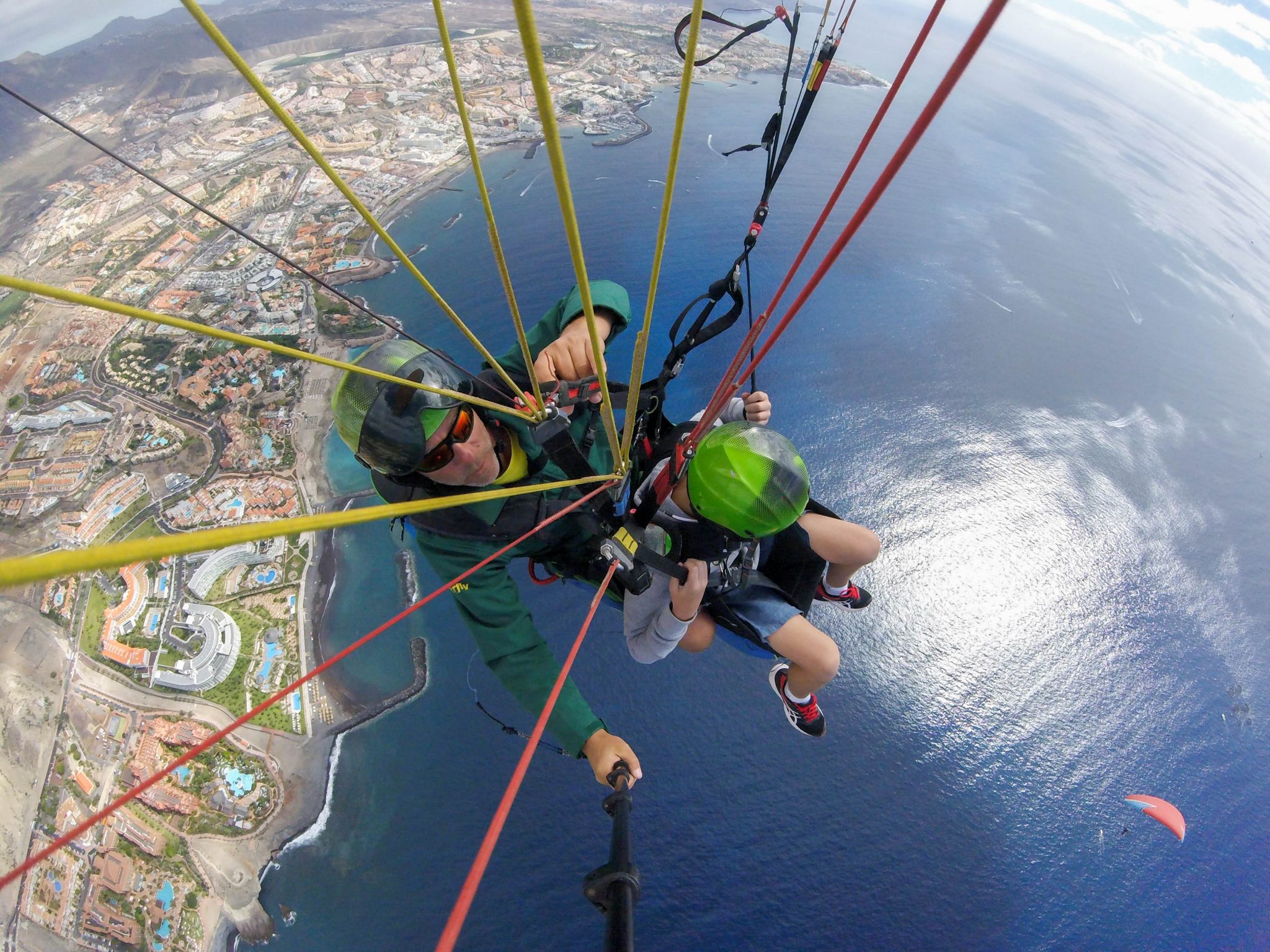 Do you know the differences between paragliding and other sports? In our paragliding guide we invite you to discover some curiosities about paragliding.

History and Evolution of Paragliding

We want to tell you the paragliding origins in this guide

Parachutes – the precursors to the paragliders – were first used in World War 1, but they remained unchanged until the 1950s. It was then when the Para-Commander (PC) was invented – an elongated parachute with vents in order to provide the jumper more control.

Later in 1961, this design was modified technically and afterwards improved by Francis M. Rogallo, who invented the Rogallo wing for the NASA in order to recover their rockets and space capsules. The new design introduced more rigid sections to the parachute, leading eventually to the design of both hang and paragliders.

Domina Jalbert invented the Ram Air canopy. This one had a double surfaced design with vents that created a wing shape from the sail, allowing that the user had even more control over the direction and the speed.

Later in the 1970s, towing Ram Air parachutes behind vehicles became a very popular leisure activity. Once released, you were free to glide — the bad part was that landings were particularly complicated, and the search for more control continued.

After 1980s, the paragliding equipment started to modernize and this sport got a new dimension. The first world unofficial paragliding championship was organized in Switzerland, in 1987. Shortly after, the Federation of Aeronautic International (FAI) recognized paragliding as an official sport and organized the world’s first official championship in Kossen, Austria in 1989.

The competitor must have compulsory an adequate paragliding license and the rest of the related documents required at that moment before the competition.

The distance covered by the competitor will be transformed into points through a computer in IGC (International Gliding Commission) format.

So, are you looking for the best paragliding holidays? In Overfly Tenerife, we will show you the most beautiful places to practice paragliding in Tenerife, Spain.

We hope that you have enjoyed this paragliding guide and don’t hesitate to join us during your paragliding adventure!