The best paragliding launch techniques you need to know

At Overfly Tenerife we are lovers and experts in paragliding, so we want to tell you all you need to know about this sport. That is the reason why in other posts of our blog we have told you how to do paragliding for the first time and the best paragliding sites here in Tenerife. Today, we are going to talk about paragliding launch techniques.

You don’t have to worry about a thing if you want to practice paragliding here with us at the south of Tenerife, in Costa Adeje. In our tandem paragliding flights, you will be accompanied by one of our expert staff. Nevertheless, if you are an expert, you don’t have to worry neither, but you must take in account that launching is one of the most “critical” moments when you are practicing paragliding.

Statistics reveal that approximately 40% of flight incidences occur during the take-off phase of flying. We know that this figure can be undoubtedly reduced by proper training and developing perfect paragliding launch techniques. If you follow our suggestions, you will reduce to the minimum the possibilities of having an incidence. Let’s see which those paragliding launch techniques are.

“I have always found it exhilarating to help people discover new ways to enjoy life and forget the stresses of daily living through outdoor activity. In particular, paragliding allows us to not only achieve an understanding and respect for our environment but also to achieve the ultimate dream: the ability to fly!” Benoit Bruneau

One of the things that we should know about the paragliding take off is that it should imitate an aircraft take off as much as possible. Quite often we watch paraglider pilots doing what we call “jackrabbit” or “hopping” launches.

Imagine that you are in a commercial flight rolling down the airport runway, hopping and skipping over the ground to take off. There is no doubt that this type of take-off would create a state of panic! That is the reason why we explain the paragliding launch techniques that we are supposed to apply effectively to have a great paragliding flight and experience

What we have to understand is that taking off is a function of airspeed and/or lift over the surface of the canopy. Every aircraft have to reach a determined airspeed before you can carry out the take-off. In other words, carry out a good paragliding launch technique.

Pulling the aircraft yoke back before reaching a particular airspeed will result in a temporary take-off for a powered plane — but without the proper speed of the air, the aircraft will drop back to the ground. This clearly depicts that take-off is a function of airspeed and/or lift over the surface of the glider, not brakes.

To elaborate on the lift factor is necessary that we all understand that the paraglider can blast off without any early running speed— this is accomplished by merely moving into the ascending airflow. Nevertheless, moving the glider into the rising air will just cause a take-off if the glider is at the apex —directly overhead.

If the glider is behind or forward of the apex or in a straight-up position, the take-off will be temporary at most or it will not occur at all. While airspeed is an important factor in take-off, a smooth take-off won’t happen unless the glider is perfectly centred overhead.

The primary reason for take-off incidences is glider deflations. A critical launch deflation close to 0the ground will probably result in the pilot rotating or stalling one side of the glider, causing anyway a reverse rotation to the ground. Deflations occur more easily if the glider is not centred overhead — behind or forward the apex — during the take-off.

A great number of take-offs include launching in turbulent or thermic air, so the glider is more exposed to deflations when it is not fully loaded and directly overhead. Thus, the two most decisive factors to a safe take-off are having the glider fully loaded and having it directly overhead. If you understand and follow these rules, you will minimize the risks of paragliding take-off.

When the glider is inflated, from forward or reverse inflation, you have to increase the forward speed gradually to carry out an effective paragliding launch technique. It is very important to incline the harness — standing upright and bending forward at the hips is the worst way to load your wing.

In other words — if you lean forward at 90 degrees and you start running in that position, your body will tend to straighten upright. That will make you losing constant loading and decreasing your capability to keep a constant running speed.

The best method is to gradually lean forward to 45 degrees during the take-off. In this position, the loading on the wing remains constant — as a result, it is easier to create airspeed, so it is the take-off.

There are several styles to perform this paragliding launch technique. It is commonly known as the “torpedo” launch. In this type of paragliding launch, the pilot is not bent at the hips, but the body is in a straight line leaning forward.

Some pilots are unable to raise their arms from the rear position due to prior injuries or simply lack of flexibility — for that reason, the hands-up position will be easier for them.  The head has to be held up, looking forward and not downward at the ground. In most cases the belly harness buckle will be shoved squarely into your sternum and, although it may not be very comfortable, this is the proper position.

We often discuss ground handling only in terms of inflation and kiting. To carry out an effective paragliding launch technique, we have to turn smoothly and simulate running off launch with the wing centred overhead and fully loaded.

You have to remember that, any time you are able to fly off the ridge prior to step into the lift zone, you have put your paraglider into its most deflation-resistance mode. Take-off occurs when the glider is directly overhead, fully loaded and it has reached the proper airspeed.

The third and the most important aspect of ground handling is launching, although it is sometimes the least emphasized aspect in ground-handling training. Our experience in terms of paragliding launch techniques has ensured more solid, safer, deflation-resistant launches even in the worst conditions.

Now that you know everything you need about the paragliding launch techniques, maybe you are interested in discovering some helpful tips that will allow you knowing a bit more. So now it is time to read the best tips to get your feet off the ground.  Off we go!

First of all, to carry out an effective paragliding launch technique, you must do the safety check. The newer pilots often have it down, while the most experienced ones sometimes drop it or they directly forget it. The lack of a safety check is the most common cause of paragliding incidences and accidents at launch.

A safety check is basically a physical check of your paragliding equipment. You have to do it after setting up your wing, clearing the lines, and buckling in.

Therefore, what you have to do is grabbing the brakes by following each carabineer down to the brake handle, being sure each brake line is clear to the pulley. If you are doing a reverse, make an “X” with the risers, and grab the suitable riser in each hand.

If you observe the launch conditions since you arrive, you will probably know the general frequency and the strength of the cycles. So relax and wait for a cycle. You have to be committed to inflation, but prepared to stop if it is not perfect. Try to make each paragliding launch technique clean.

Let the Up-rising Airflow Give you a Lift

When you are practicing paragliding, you shouldn’t want to rush into your launch. You just have to move into the ascending airflow. Nevertheless, to pull off this proper paragliding launch technique, your paraglider must be directly overhead.

If the paraglider is behind you — or even a little ahead— the take-off will be rough and a bit dangerous. Moreover, it is probably you don’t even take off. Ground handling is a critical part that you have to learn perfectly throughout your paragliding lessons.

Flowing instead of pulling

The proper paragliding launching technique requires you to take off directly into the wind. You have to remember that your launch should be like an airplane taking off — flowing down the runway at a smooth and a gradual increase of speed.

Not being in full control and, for instance, being pulled from your launch can result in a higher stress level. This could damage your entire paragliding experience. That is the reason why we recommend you to go with the flow in full control of the process, but never let it pull you.

If we talk about paragliding launch techniques, you have to imagine yourself as a pilot of an aircraft. Frequently, new paraglider pilots hop into their launch, and this is a poor technique. Your paragliding launch technique has to be very similar to the one used by an airplane when it is taking off. There is no hopping, bouncing or skipping, but an effortless and gradual take-off.

If you do exactly the opposite, it can cause that your paraglider stays ahead or behind you, and you already know that it increases the risk of a launching incidence. Your wing has to be directly above you for a proper launch, always. So act like an aircraft pilot, and not like a bunny — that will only cause you troubles.

One of the most important components of a proper paragliding launch technique is to have your glider fully loaded. Anything short of that can make your take-off quite unpredictable, as it can cause deflation close to the ground.

Furthermore, a loaded wing is faster and reacts better to the input you give with the brakes too, so it is also easier to control. You have to learn to optimize your paragliding launch technique using your weight in the harness while you are running. This will instantly minimize the risk of suffering any launching incident.

We hope that you have enjoyed our post about paragliding launch techniques and that it has provided useful information about paragliding. If you have any doubt or you want or need more information, don’t hesitate to contact us. We will be pleased to help you anytime! We are waiting for you in the south of Tenerife!

The best paragliding sites in TenerifeUncategorized 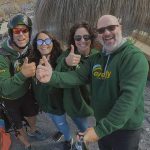 The 3 best paraglider folding techniques you need to knowUncategorized

By continuing to use the site, you agree to the use of cookies. More information